During the college basketball season, sports bettors can find an almost daily dose of action at your favorite online sportsbook. This is especially true heading into the month of January when the conference portion of the schedule gets underway.

Betting lines for all the matchups in the major conferences are normally released a day in advance. Once you reach the actual day of the games, many of the top online books will release a new set of betting lines for additional games. These added games cover many of the matchups in the smaller Mid-Major conferences. Once you identify the online books that specialize in added college basketball games, they are very easy to find on a regular basis.

These added games fall completely off the national radar of the general betting public. Since they involve teams that many bettors have never even heard of before, there is an inherent betting value added to these plays. The opening lines tend to be a bit softer than the ones set for the Top 25 matchups and they will not be impacted by any early money coming in.

A good rule of thumb is to always bet on the teams and games you know the best. There are over 30 conferences in Division I college basketball so it would be next to impossible to have a deep knowledge of every conference and every single team. However, one betting strategy is to become a subject matter expert for one or two of the small Mid-Major conferences. By getting a good feel for a few smaller conferences, you can take advantage of a few of the added games to each day’s schedule.

The easiest way to find a smaller Mid Major to follow is geographically. If you are an East Coast fan, you probably gravitate towards the ACC, Big East and maybe even the Atlantic 10. Also in the mix are smaller conferences such as the Colonial Athletic Association (CAA) and America East.

At a quick glance of the current standings in the CAA, Hofstra is 11-5 against the spread overall with a 9-3 record ATS as a favorite. Stoney Brook is 11-4 ATS in America East and the Seawolves have covered in six of the seven games they have closed as favorites.

Once conference play is underway, handicapping games in the smaller conferences is much easier to do. Once again, focusing your energy on just one or two of the smaller Mid Majors is the best way to improve your overall winning percentage. Familiarity can often times enhance predictability. Recent betting trends between the two teams become more relevant along with current form.

Many times, you will be able to find at least one or two of these added games that literally jump off the page as a value bet. This is not something you should force just to create some action on an added game. However, if you are serious about improving your overall return on the bets you place, this is a viable option.

One of the side benefits to betting smaller Mid-Major conferences is a leg up on March Madness. All of these conferences will stage a tournament at season’s end. The winner will gain an automatic berth into the annual NCAA Tournament so there is quite a bit on the line in actual elimination play. The year-end conference tournament is an excellent way to cash a few extra winner tickets if you have been following these teams all season long.

Read More
Know Your Betting Rules at Your Online Sportsbook

When you walk into a land-based sportsbook at any casino hotel and resort, the people… 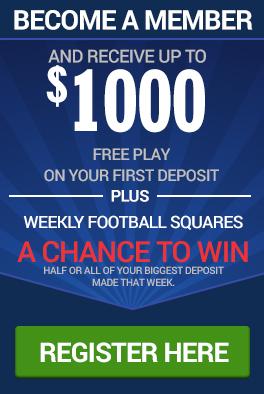 Make a deposit Monday thru Friday, and get a FREE entry into our weekly football square pool.